We’ve transformed an old school into a microbrewery with bistro style restaurant, 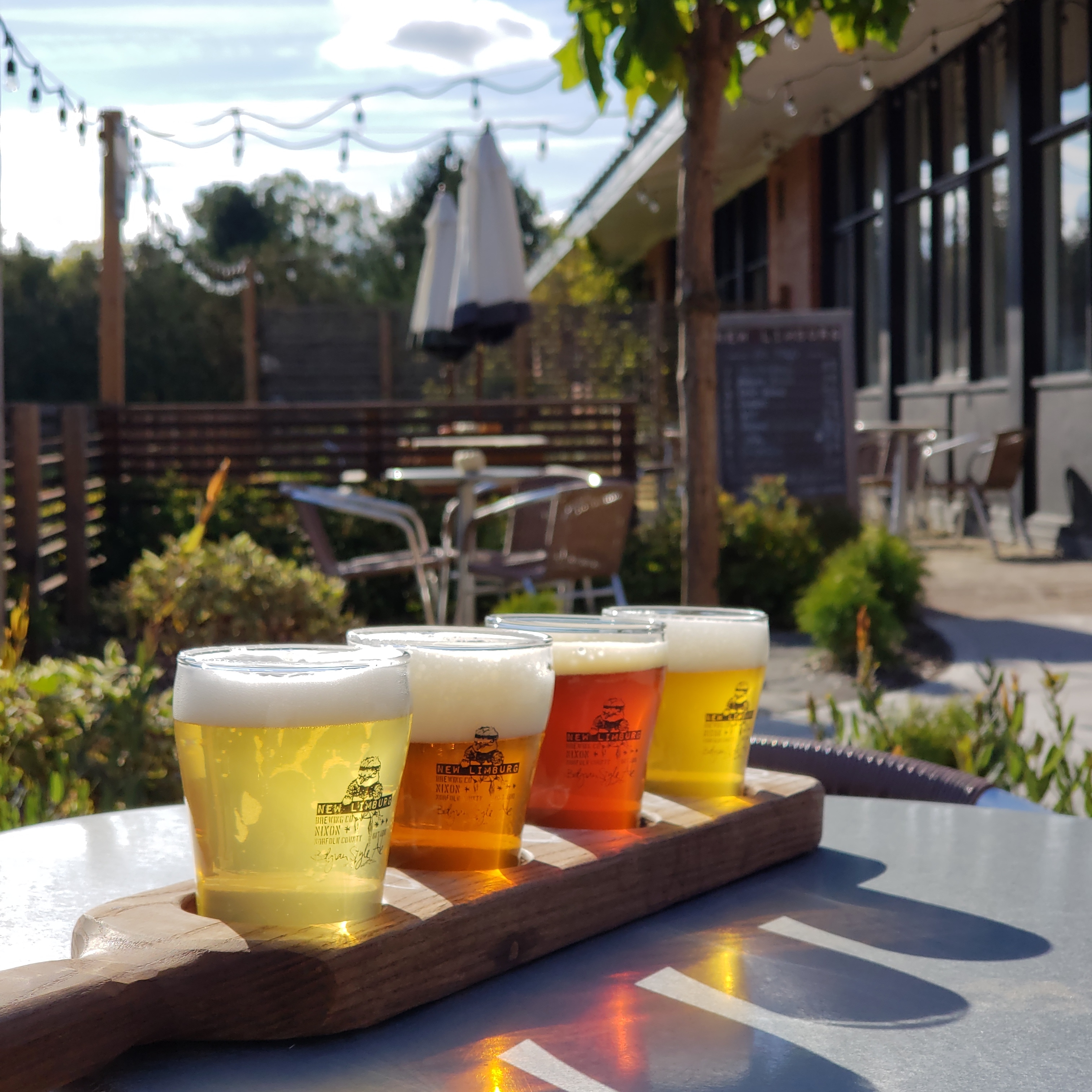 It began as a family company making Belgian style ales. Initially it was hobby brewing, father Jo and son Mischa. The beer proved such a hit with friends and family, it just took off from there.
Having moved from Limburg in the Netherlands to Limburg in Belgium, they had come to appreciate the Belgian style beer. Inspired, it was decided to try and recreate that beer culture in their business. New Limburg was born. With an emphasis on Belgian style, they came out with their flagship beer, the Belgian Blond. From there a line of more of these style beers came to be. The ambition and point of pride, especially for Mischa, was to make their own Trappist style beers. Trappist beers, traditionally brewed by monks in their abbeys, are some of the most highly regarded beers in the world. Though being the artists that they are they also experimented with different styles that resulted in some unique limited edition brews. Taking us four years ahead now, in 2019, Mischa and Estelle are starting Meuse Brewing, a new micro brewery, intending to add even more of the Belgian Style varieties in Meuse’s future line up.
Bringing a little bit of the Belgian beer culture to Canada was the goal; to have people come to the tasting room and enjoy them. The success shows that we’re making a positive contribution to the community. We like to support more local businesses by providing other locally made products. That is why snacks and foods were slowly introduced to a point that a kitchen became operational with “slow food”. This is best explained as; dishes that are prepared by avoiding the use of microwave ovens, resulting in longer then usual serving time for food items in the bistro restaurant.
People are mostly surprised to see a place like this out in the country. Re-using an old school as a brewery is quite a unique concept. Want to experience it for yourself? Come visit us!

Fashioned after the European beer cafes, we wanted to make a comfortable homey feel in our tasting room / bistro restaurant. At the same time we loved the classroom with the blackboards and large windows. Set up like a bar we provide the full experience for enjoying our Belgian beers.

Stop by today for a nice cold beer and some “slow food” in our cozy atmosphere.
In addition we serve local and imported wine and cider

An expanding menu is becoming available again in our dining room 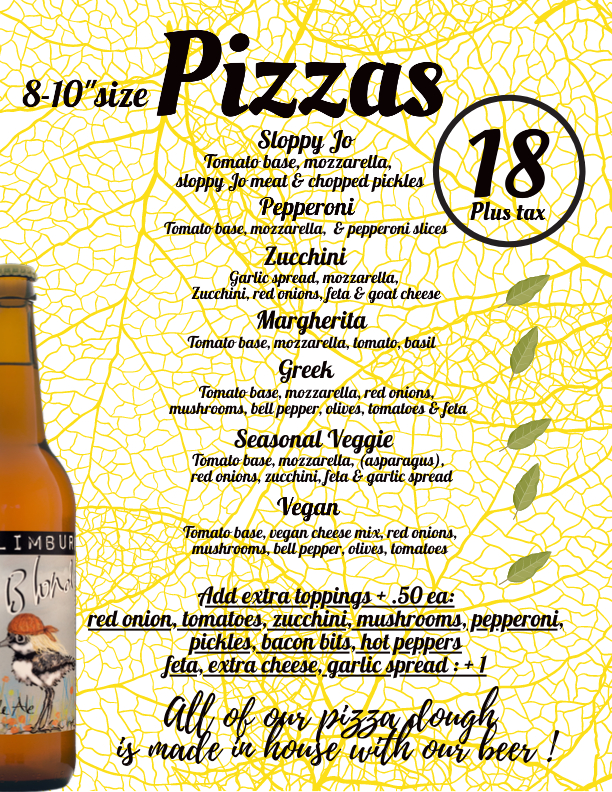 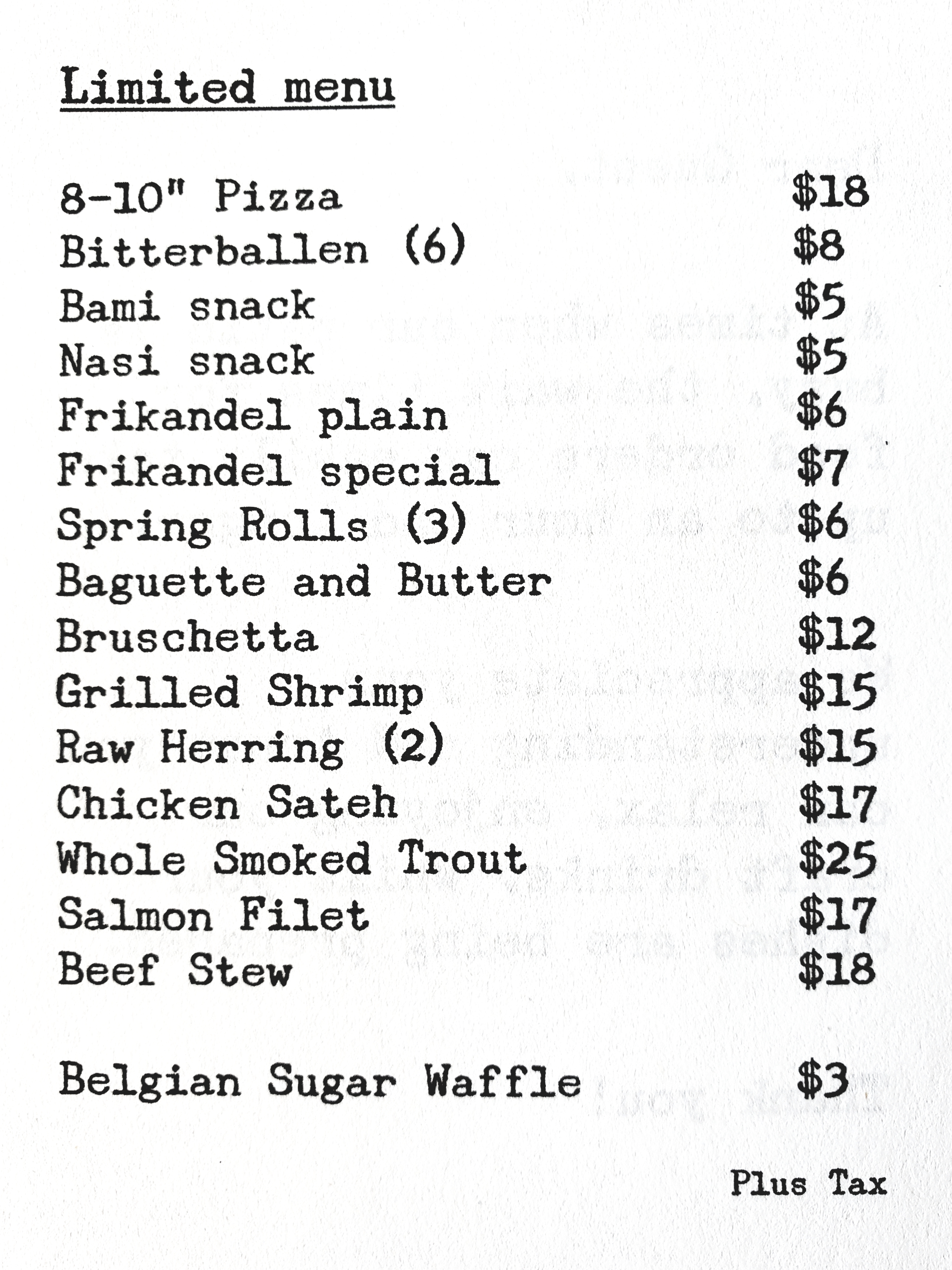 Please also be advised that most of our food is “slow food”. You best enjoy a drink or two and relax, as it might take up to an hour or longer for your meal to get served, all depending on type of order and number of orders at the time.We strive to prepare as fresh as we can and without the use of micro wave ovens

Can’t make it out to the brewery to try our beer but want to enjoy the experience?Stop by the LCBO, Beer Store or Restaurant locations in your area!

Check out this link to an episode of LCBO’s Food and drink “5 Stops” featuring New Limburg as one of Norfolk County’s stops!LCBO Food and Drink 5 stops, Norfolk
To find out at which LCBO locations you can find our beers you can go to their website to find the Belgian Blond or the New Limburg Wit. Under Product Availability, you can select a store based on your location or check all stores for all our listings. If we’re not at your local LCBO, you can always ask if they can bring it in for you!Stay tuned for our availability.Jo GevenOwner / Operator

The atmosphere that has formed around the brewery and bistro restaurant, it’s normal for us. In Europe, you have these kinds of cafes everywhere; strangers talking to each other and enjoying themselves. After a hard days work, there is nothing more satisfying than to sit down with a nice cold craft beer and interact with people who are looking for the same experience. With the snacks and house made dishes I create inspired by our family’s childhood favorites, it all comes together. It’s become a piece of Limburg in Norfolk County.Yvonne MoonenArtist & Owner

Though I create the artwork for the bottles and work on the administrative side of things, I really enjoy being creative with the spaces. Lately I am spending most time finding creative outlet in the kitchen while preparing dishes. With this kind of business, you get to meet people you would otherwise not cross paths with. Everyone has a story to tell.